Being my own boss – Female Entrepreneurs@FS

On March 21, 2019, alumnae and female students of Frankfurt School of Finance & Management learned about what it means to found and run your own business, especially when you are a woman. During the event entitled “Being my own boss – Female Entrepreneurs@FS", the alumnae Brigitte Adrian-Schroeder and Kristina Herzog described their paths from regular employment to starting a company as well as the challenges they have encountered along the way. 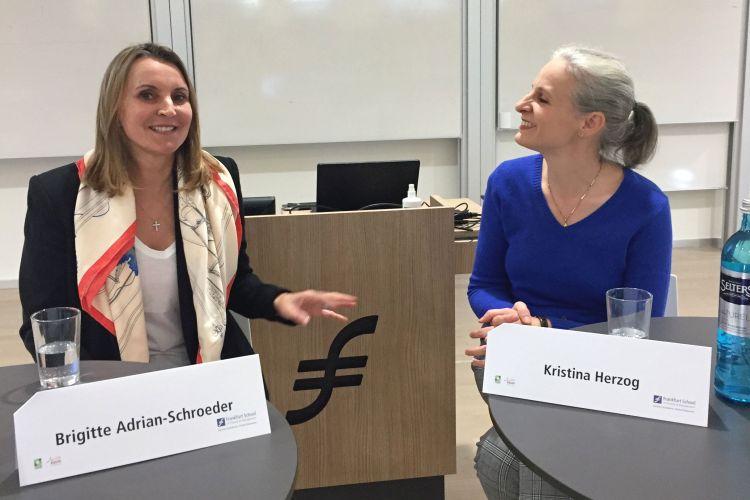 Brigitte Adrian-Schroeder – class of 1996 and founder of Balance Yoga Institut, related that she was not taken seriously when she first talked about opening her own Yoga studio. She encouraged students and alumnae to believe in themselves and follow their ideas despite what others might say. She explained that in the end, “passion is what keeps you going”. The second speaker, Kristina Herzog – class of 1995 and founder of Frankfurter Familien Treuhand – strongly agreed on the importance of having a guiding vision, but urged the audience to stay open-minded at the same time. One needed to be prepared for a constantly changing market on the one hand as well as for the troubles that life and people bring along on the other hand.

The present students and alumnae took an active part in the discussion moderated by Karin Reuschenbach-Coutinho, Head of Career Services, and asked many questions concerning the dos and don’ts of setting up a company. It became clear that being one’s own boss is not for everyone and requires a lot of persistence as well as the ability of self-organisation. However, both speakers finally agreed that for them entrepreneurship was the right choice. As Brigitte Adrian-Schroeder put it: “Nobody else is telling you anything – and that’s the best part!”

The event is part of the series “Ladies First – Forum for female students and alumnae” organised by Career Services and Alumni Management of Frankfurt School. It addresses career topics and the specific challenges women face, including the compatibility of family and career, women in management as well as general life decisions. The speakers serve as role models, talking about their own career path and sharing their experiences.