Turkey hosts more refugees than any other country in the world, where large migration flows of Syrians fleeing from the civil war in their home country has affected the Turkish community. Under this project, Frankfurt School was tasked to conduct a feasibility study outlining the options available to Turkish partner institutions to financially support small and medium-sized enterprises (SMEs) in selected regions and sectors to create employment for Syrian Refugees under Temporary Protection (SuTP).

The main objective of the Project is to conduct a feasibility study for launching a programme to support and empower the private sector in Turkey to create formal employment for Syrian refugees and the Turkish host community.

EBRD has been planning to strengthen and streamline its approach to support innovation and related policies in Turkey. The approach builds on the experience accumulated through its investments in the corporate sector and policy engagement. To promote innovation policies in line with best international experience, Frankfurt School assisted EBRD to identify potential areas for policy engagement with the Turkish Government and to define the operational approach to streamline investments in innovation by mid-caps and large companies across multiple sectors of the Turkish economy.

The main objectives of the Project is to assist the EBRD (İ) in the identification of potential areas for policy engagement with the Turkish Government, with the objective to promote innovation policies in line with best international experience, and (ii) in the definition of operational approach to streamline investments in innovation by mid-caps and large companies across multiple sectors of the Turkish economy.

The Turkey Agricultural Finance Facility (TURAFF) was a flagship programme launched by EBRD with the objective of increasing Turkish farmers’ access to finance. Between 2010 and 2017, Frankfurt School advised and assisted 9 Partner Banks (PBs) in the development of new products for new and existing markets, training more than 2,600 bankers in topics such as MSME lending, agri-lending, agricultural risk management, and environmental risk management amongst others. In addition, we also supported the development and expansion of small agricultural loans and loans to female farmers, where more than 1,000 women in 12 provinces attended the delivery of regional entrepreneurship seminars tailored to women entrepreneurs.

The overall objective of the programme is to help partner banks part in the EBRD Turkey MSME Lending programme introduce and/or further accelerate Micro- Small and Medium-Sized Enterprise (MSME) lending techniques to the least economically developed regions of the country, thereby increasing access to finance by MSME borrowers. The programme specifically targets MSMEs, farmers and agribusinesses located in rural areas. Besides the measures supporting MSME lending, the programme offers focused technical assistance measures to increase credit to the agricultural sector and to enable partner banks to lend at stable levels in rural areas of Turkey.

Frankfurt School advised and assisted PBs in the development of new products for new and existing markets, and the development and expansion of portfolios of small Agricultural loans and loans to female farmers as well.

Apart from that, the technical assistance focused on training and seminars on sustainable Agriculture; development of Agricultural risk assessment tools and innovative finance mechanisms like value chain finance and overall business strategy development in Agricultural lending and establishment of dedicated departments for Agri-lending. To also increase capacities at the sub-borrower’s level, a number of training and capacity-building events have been implemented (such as modern Agriculture training as well as financial literacy training for farmers).

Frankfurt School carried out a capacity-building project in the Credit Guarantee Fund (KGF) on behalf of the European Investment Fund (EIF). KGF is the only credit guarantee fund in Turkey, which is insufficient collateral and / or non-operational history and to provide guarantees for SMEs and start-ups was established 20 years ago. The aim of the project is to support the SME lending processes of KGF participating banks, to provide collateral to small enterprises to provide loans under market conditions and to improve the capacity of KGF in order to increase the access of micro-enterprises and SMEs to finance. Within the scope of the program, a certain number of KGF employees were provided with training and coaching services by accelerating the provision of collateral. In addition, KGF's business processes were improved, a business plan was created and a Portfolio Guarantee System (PGS) was developed.

The introduction of the new Portfolio Guarantee System (PGS) achieved success beyond expectations. The web-based application serving 9 participating banks was developed and put into use in February 2014. Between March and December 2014 alone, 1,900 SMEs benefited from collateral through PGS. In addition, Frankfurt School increased the awareness of PGS among participating banks, and introduced applications and products to 685 employees from 8 banks in 35 PGS workshops held in 11 regions.

In order to provide SMEs with information about the Great Anatolian Guarantee Facility Project (GAGF) and to increase access to bank financing, 11 regional seminars were held under the title "KGF Brings Micro, Medium and Large-Scale Enterprises and Banks Together" and introduced KGF products. Thanks to the information that the participants received about banking services and credit operations during the seminar, it was aimed to make communication with banks more efficient and to facilitate their access to finance.

The 2nd Stage of Turkey Small Enterprises Loan Programme (SELP II) was initiated by the European Commission and Turkey Undersecretariat of Treasury, Council of Europe Development Bank (CEB) and KfW - Entwicklungsbank, the partnership was launched. SELP II provided SME financing and technical support services in 49 provinces with priority in development, extending to Central Anatolia, Eastern Anatolia, Southeastern Anatolia and the Black Sea region. Small loans of up to € 50,000 with SELP II were provided to SMEs through various participating banks. SELP II consists of four components:

Frankfurt School provided technical support to 4 banks (Akbank, Garanti, İş Bankası and Şekerbank). Within the scope of the support, best practices in SME loans were introduced, information was conveyed on strengthening the credit organization and procedures, scoring model was developed for micro enterprises and start-ups and agricultural loans were evaluated, a specially developed human resources policy was implemented, and loans were given to bank employees through training. information was given on the follow-up of the portfolio. In addition, financial literacy seminars were given by Frankfurt School to an average of 500 local SMEs and women entrepreneurs in 12 project regions. Within the scope of the project, demand research, employment creation research, financing research for women entrepreneurs, regional lending capacity research were also conducted. Finally, at Frankfurt School TKB, APEX carried out capacity building work in the fields of banking, management systems and process management, strategy and marketing, financial modeling, securitization strategy, active creation process flow and documentation, intercultural communication and presentation skills, impact analysis.

At the end of the program, four participating banks from 49 provinces provided 185 million euros in financing, with more than 17,000 loans. Average loan size was 10,700 Euros. More than 12,600 jobs have been created and over 61,000 jobs have been successfully maintained. 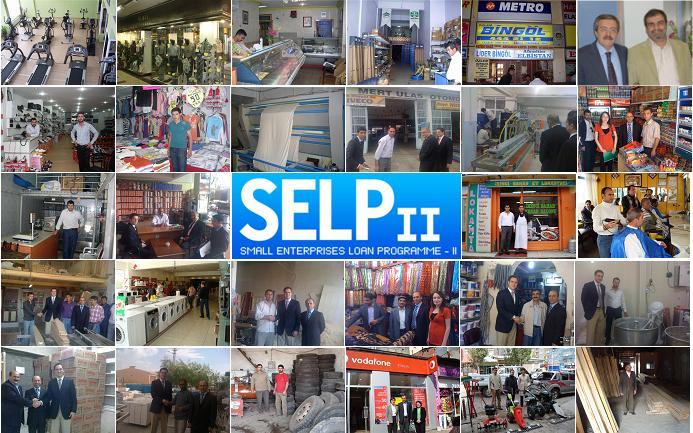 The European Investment Bank "Turkey Banking Sector Small and Medium Enterprises Project Finance" Program of the (2004-2006), Turkey's two biggest state bank, Ziraat Bank and the development banks linked to the state with Halkbank Development Bank of Turkey has been included . The main outputs of this project can be summarized with the statistics presented below:

The European Commission has developed the Small Enterprises Loan Programme in cooperation with KfW to solve problems in accessing finance. The project, with the support of participating institutions, encouraged the growth of small businesses, helped establish sustainable loan plans by commercial banks, and contributed to the growth of the financial sector. SELP aims to contribute to economic development by creating employment and to enrich the financial sector in three project regions in Kocaeli, İzmir and Gaziantep. The 17.4 million euro budget allocated for the program was transferred 2.09 times. A total of 36.4 million Euros of credit was provided to small businesses through participating banks and employment was created for 2,281 people.

Our SME Banking and Development Work