SAVE THE DATE: FS Alumni Homecoming on 17 September 2022!

“Back on Campus: Coming together again!”

On 18 September 2021, Frankfurt School celebrated the traditional FS Alumni Homecoming event. After last year’s online version, over 350 guests and participants attended this year’s Homecoming in person as it made a triumphant return to the Frankfurt campus. The Alumni Relations team was responsible for sending out invitations. Highlights included workshops on a range of topical subjects, a keynote speech by soccer expert and business entrepreneur Urs Meier – and, of course, the traditional evening barbecue on the North Terrace, where FS Community members were able to enjoy each other’s company in relaxed surroundings. In the morning, before the programme officially started, alumni celebrating their Class of 1995, 1996, 2000, 2001, 2010 and 2011 anniversaries met up for an exclusive President’s Breakfast in the Executive Lounge.

Following the welcoming address by Professor Nils Stieglitz, President of Frankfurt School, and Francisca Blenich, Manager Alumni Relations, guests attended the first workshop session of the day. In a total of six parallel workshops, participants shared and discussed their thoughts on IPOs and SPACs, corporate liquidity management during the pandemic, the impact of COVID on sovereign debt, career development tactics, the rise of cryptocurrencies, and future-proof business cases (ESG). Each workshop had two leaders: a Frankfurt School faculty member and a Frankfurt School alumnus or alumna. “I was impressed by the panel and by the discussions between members of the FS Community; it all gave me a lot of food for thought. We had a very lively debate about ESG factors and how they’ll affect tomorrow’s business world,” commented Victor Lanckriet, an alumnus of the Master in Management Class of 2020 now working as a Project Analyst Pay Per Use at ING, who attended the workshop led by Professor Ulf Moslener and FS alumnus Mark Hoff.

Networking, tasting, touring the campus, listening to the keynote

Over lunch, the visiting alumni chatted to former fellow students and other FS alumni and visited the tasting stands run by Vera Spirits and sailwithus, as well as the waffle stand sponsored by FS Alumni e.V. Some of them were first-time visitors to the business school’s Frankfurt Nordend campus, which opened in 2017, and gladly accepted the offer of a guided campus tour.

After a second workshop session in the afternoon, everybody assembled in Frankfurt School’s Audimax lecture theatre to listen to the keynote speech by Urs Meier – entrepreneur, Top 100 speaker and soccer expert. In a talk entitled “Between the frontlines – decisions under pressure”, he spoke about his experience as a former soccer referee. “Referees make between 250 and 300 decisions during a match – under enormous time pressure,” he told his listeners, adding: “Every big decision is also a big risk. But it’s a risk we have to take to change the way people think.”

In a positively festive atmosphere, alumni, faculty members and Frankfurt School staff finished the evening with a barbecue and drinks on the campus’s North Terrace.

“We had a great day! I learned a lot, found myself way out of my comfort zone, met loads of new people and caught up with old friends,” laughed Julian Schmidt, an alumnus of the Master in Management Class of 2020, who now works as an analyst at SGT Capital.

“A great opportunity to network and appreciate that special Frankfurt School spirit. But also to experience Frankfurt School as it is now, with its new infrastructure and state-of-the-art curriculum,” enthused Markus Brandau, an alumnus of the Diplom-Betriebswirt Class of 2000 now working as Head of Strategy Execution/Group Procurement at Merck KGaA.

“Back then, we’d never have dreamed that Frankfurt School would develop the way it has – it’s done everything right! I’m particularly impressed by the close cooperation between the university and the Alumni association. This event clearly shows just how well they work together,” confirmed Matthias Spletzer, an alumnus of the Diplom-Betriebswirt Class of 2003 now working as Relationship Manager Financial Institutions at KAS BANK N.V.

A big thank-you to all our partners

Frankfurt School’s Alumni Relations team would like to thank all the partners who so generously supported this event and by doing so, made it unique: Fitvia, FLIK Sektmanufaktur, Alliance Concept, Vera Spirits, Bembel with care, sailwithus and in particular Frankfurt School Alumni e.V., which is celebrating its 25th anniversary this year. Many thanks to you all for your fantastic support and collaboration! 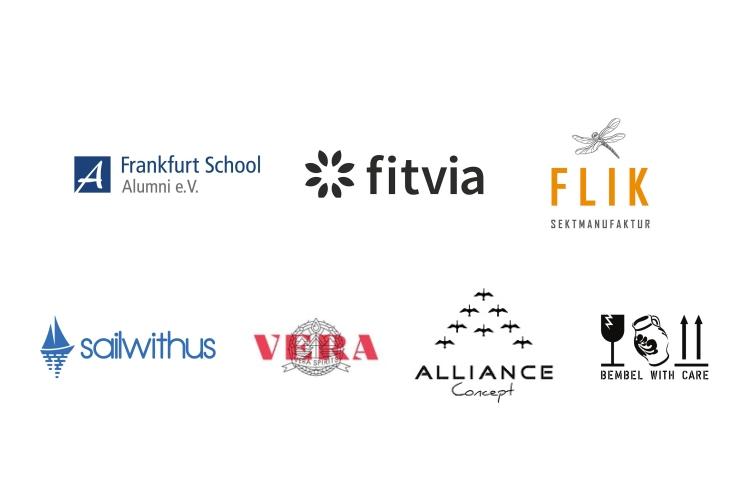