The two awardees of the FS Spirit Award are honoured as lifelong Frankfurt School role models. They are given their own spot on our Donor Wall and their names appear next to the names of illustrious companies, alumni and parents who have donated thousands – in some cases even millions – of euros to Frankfurt School.

The prize winners are Lynn Cunningham (Master in Management, Class of 2021) and Patrick Becker (Bachelor of Science in Business Administration, Class of 2021). 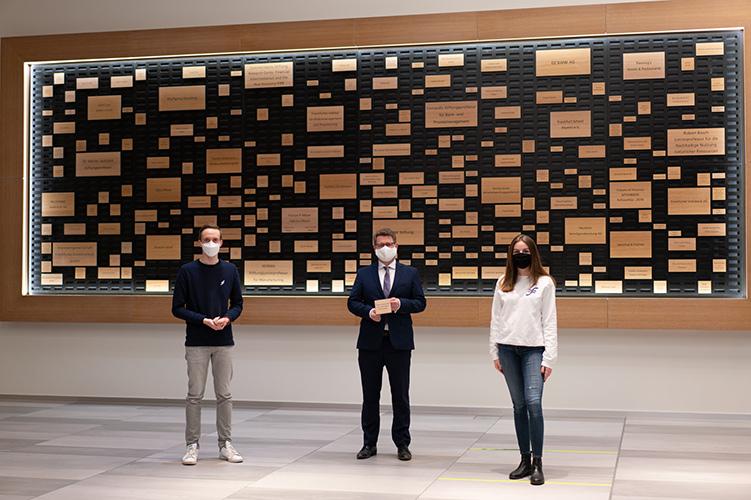 The prize winners are Jaskaran Singh (Bachelor of Science in Business Administration, Class of 2021) and Antonio Gutiérrez (Master of Finance, Class of 2020). 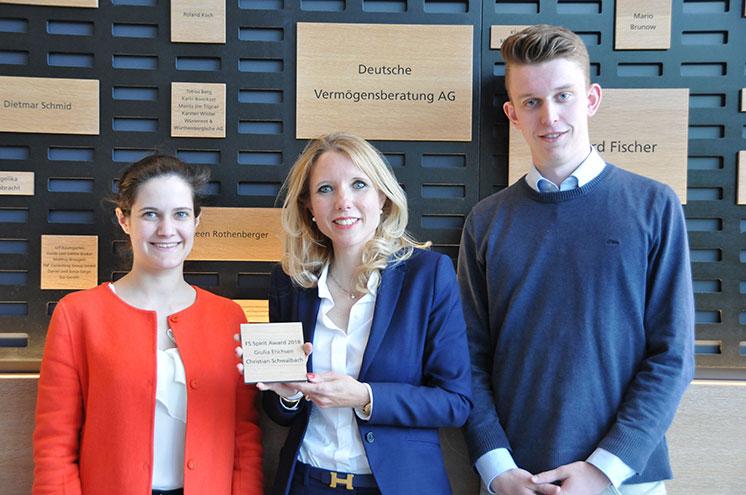 The prize winners are Ann-Sophie Molter (Bachelor of Science in Business Administration, Class of 2019) und Fabian Aymanns (Master in Management, Class of 2017). 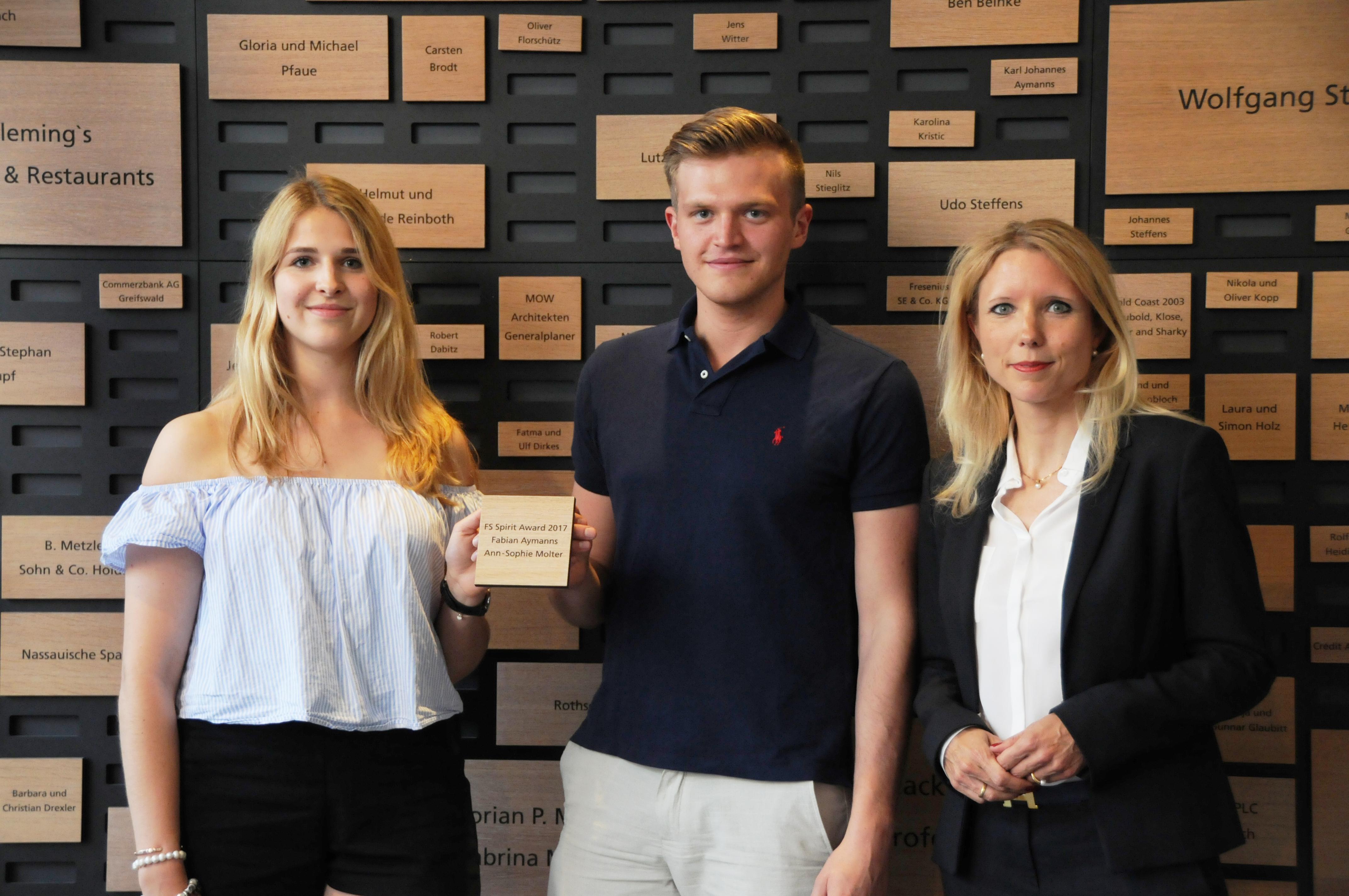 As a lifelong member of our community, you are an ambassador representing Frankfurt School and our values. The Frankfurt School community depends on each and every member of the community to act honestly and fairly, and to take pride in our shared values during their time at university and throughout their lives. In line with the Frankfurt School‘s values “Motivated, Entrepreneurial, Cooperative, Integrity” the student core values comprise of respect, responsibility, engagement, trust and cooperation. These five values form the foundation of our self-confidence and standing as one of Germany’s leading business schools. We live and embody these principles each and every day.

Interessengemeinschaft Frankfurter Kreditinstitute GmbH (IFK) was founded in March 1949 as a self-help organisation for the banking industry in Frankfurt. The organisation’s primary remit is to manage equity investments on behalf of the banking community. IFK also sponsors projects by universities in the Rhine-Main region, especially those involving research into financial issues.

Thema der Thesis: The role of objectives and key results OKRs in the formulation and execution of strategy

The Manufacturing Management Award is presented to students graduating from Frankfurt School’s Master in Management (M.Sc.) programme by the Industrieseminar Frankfurt institute, in recognition of outstanding Master’s theses of relevance to the manufacturing industry. NORMA Group AG, a major automotive industry supplier, is the award’s sole sponsor.

The Frankfurt Institute of Risk Management and Regulation (FIRM) has been presenting the FIRM Risk Management Award since 2016. The award goes to the three top-scoring graduates on Frankfurt School’s Master of Finance programme with the Risk Management concentration. The FIRM award is made in recognition of students’ outstanding achievements in risk management.

FIRM addresses a broad range of issues involving “risk, risk management and regulation”, sponsoring high-quality research and teaching in these areas. Banks, financial services providers and associations regularly consult FIRM, as does the State of Hesse.

Master of Finance in the Risk Management concentration

Master of Finance in the risk management concentration

For the best Master thesis with a focus on Risk Management

Master of Finance in the Risk Management concentration

For the best Master thesis with a focus on Risk Management

Every year, this prize is awarded to the nation’s top-scoring management studies graduate at Frankfurt School of Finance & Management. The prize was awarded for the very first time at the 2006 Graduation Ceremony. Since 2008, the prize has been awarded at Graduation Ceremonies in Frankfurt’s famous Paulskirche. Since 2015, the Professor Dr Karl Friedrich Hagenmüller Foundation has also awarded a prize for the top-scoring student on the Bank Administrator course in an examination year.

Professor Hagenmüller was the founder of Bankakademie, Frankfurt School’s forerunner. At the time, he was Professor of Banking & Finance at Goethe University Frankfurt, and sat on the Board of Directors of Dresdner Bank AG. Until 1981, he had a huge influence on the business school’s development in a number of different roles. To support Bankakademie, he set up a foundation with his own name in 2000. And in 2009, the business school named one of the university professorships after him, the Hagenmüller Chair of Financial Risk Management, currently held by Professor Dr Martin Hellmich. Professor Hagenmüller died at a great age in September 2009. 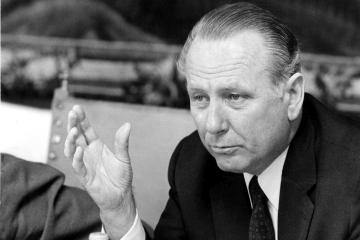 Professor Hagenmüller was born in Naila in Germany’s Upper Franconia region in 1917. He died on September 29, 2009.

Professor Hagenmüller started by studying Mechanical Engineering and Business Administration at university, interrupting his studies to serve in the army in the Second World War, during which he earned the rank of captain. He resumed his Business Administration studies in 1946, graduating one year later. He was awarded his doctorate in 1948. Following his accreditation as a university lecturer (habilitation) in 1950, he was given a teaching post at the University of Munich, moving to Goethe University Frankfurt in 1952, where he was named Chair of Banking & Finance in 1953. He also headed the university’s Institute of Cooperative Studies, Trades and Crafts.

In 1966, he moved to Dresdner Bank, where he was appointed to the Board of Directors in 1967. Dresdner Bank’s famous “Silver Tower” was built during his time at the bank; until 1990, it was the tallest building in Frankfurt. He continued to maintain a close relationship with Goethe University as Honorary Professor of Business Administration, specialising in bank management in particular.

Professor Hagenmüller produced his three-volume opus “Bankbetriebslehre” (About Bank Management) in 1964. It has become a standard reference work, now in its fifteenth edition.

Professor Hagenmüller sat on numerous boards and committees of both businesses (e.g. as President of GfK in Nuremberg, Chairman of the Supervisory Board of Bilfinger & Berger) and academic institutions (such as the Schmalenbach Society and the Fraunhofer Society).

Together with Dr Reinhold Sellien, Professor Hagenmüller co-founded Bankakademie (the Banking Academy) in 1957; he worked as the institution’s Academic Director for many years.

Professor Hagenmüller remained closely involved with Frankfurt School of Finance & Management, the successor to Bankakademie, until the day he died. He gave “his” business school all the benefits of his own extensive experience, based on his research, teaching and real-world practice. He also founded his own eponymous foundation, which continues to sponsor Frankfurt School and its students today.

The Hildegard Leonardi Memorial Prize was set up by Frankfurt School’s faculty staff and alumni, and is awarded annually. The prize pays tribute to a student who has rendered outstanding services to the student community during his or her time at the business school.

From the very beginning, Professor Dr Hildegard Leonardi played a key role in the development of the Hochschule für Bankwirtschaft (HfB). She was Dean of the university from 1997 to 1999.

Quite apart from her professional achievements, her open-minded personality had a strong influence on the university, acting as an inspirational example for both students and teaching staff. For her, it was self-evident that business considerations must also embrace the social and personal.

As an enormously appreciated and beloved colleague, she left her imprint on our business school. To express our appreciation and in fond memory of her inspiring personality, the faculty members and alumni of Frankfurt School set up the Hildegard Leonardi Memorial Prize in 1999, to recognise students who have worked especially hard to address the social concerns of their fellow students.