Emergence of the Campus Adickesallee

FS was very excited to welcome the first of the trees to the new campus on April 12. The trees represent the vegetation of the five different continents – Africa, America, Asia, Australia and Europe – showcasing Frankfurt School’s international outlook. 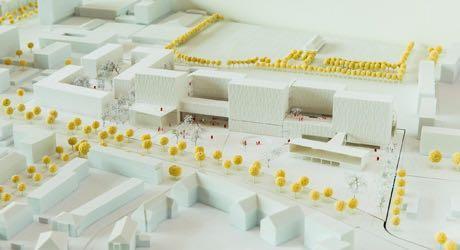 The architectural design of the new campus aims to create a meaningful public space that connects Frankfurt School with its surroundings. The design takes the former Regional Tax Office (OFD) building as its starting point, echoing the latter’s overall size, appearance, materials and geometry. In keeping with the site’s heritage, the front of the new building is set off by large, tranquil, open lawns, offering an unimpeded view of the management building. The campus is easily accessible from all sides, and closely integrated with the surrounding area. It is divided up into a series of slightly offset towers, arranged in such a way that sightlines are left open on all sides.

The height of the towers has been kept in line with the former Regional Tax Office building, creating a canyon-like space through which runs the “Zeil of Knowledge”, named after Frankfurt’s busiest shopping street. This acts as the central meeting place and focal point for the entire campus: the social hub of the complex. All major facilities – the main auditorium (Audimax), Learning Centre, restaurant, deli, Student & Alumni Relations department, breakout and seminar rooms – are linked to the Zeil, which is a large, open, inviting space resembling a promenade or mall. The Zeil connects all floors and facilities with the main entrance.

The restaurant (Mensa) is on the ground floor and opens onto the Zeil on one side, and onto the café/delicatessen (the deli) on the other. In turn, the deli opens onto a large, outdoor terrace extending between the main building and the management building. The restaurant also features an exclusive executive area.

Seminar rooms and classrooms are located on the ground, first and second floors. They all face outwards, whereas breakout rooms and common areas face inwards, onto the Zeil of Knowledge. Large and small rooms fulfilling different functions are deliberately interspersed with each other, ensuring an even mix of activities throughout the building. The two sidewalls of the canyon are linked by several bridges, which add energy and movement to the space as a whole.

"For top-quality research, you need an inspiring environment – and that’s what we’re building on the new campus!"