With the settlement of bees on our north terrace the Frankfurt School has realized another sustainability project in line with the corporate strategy.

The surrounding parks and public green areas are ideal for bees. Since spring 2018 four bee colonies are living on the FS roof terrace and are producing honey. The project has been provided with funding by the program „Aktion Blauer Adler“ of the Allianz Umweltstiftung. The foundation is aimed at small local environmental projects and works together with an Allianz agency on site.

Frankfurt School employees and professional beekeepers of the Bienenbotschaft provide care for the bees. Furthermore, Frankfurt School is now a member of the Frankfurt Imkerverein e.V. and is networking with other local projects and initiatives which are dedicated to the preservation, expansion and development of the bee habitat.

In June 2018 the Hessian Minister for the Environment, Energy, Agriculture and Consumer Protection, Priska Hinz, visited the FS bee project. Thereby it has gained recognition as an exemplary initiative in the sense of the campaign „Bienenfreundliches Hessen“.

Following the “we4bee” competitive tender sponsored by the Audi Environmental Foundation and carried out in collaboration with the HOBOS research project, Frankfurt School’s bee project was selected as one of 100 global sites for positioning high-tech beehives. In 2019 a new beehive will be set up on the North Terrace. Using state-of-the-art research technology, it will supply data to a global network for analysing bee behaviour.

The Frankfurt School bee project finds detailed attention in a current film "Die Bienenbotschafter", broadcast on 3 September 2019 and still available for about a year in the ARDmediathek (from minute 26:20 onward).

In October Frankfurt School officially opened its new campus in Frankfurt’s Nordend district. With its new building the business school has responded to the increasingly sophisticated needs of its students and teaching staff. Hence, Frankfurt School has created a state-of-the-art teaching and working environment that will help to take the business school to the next level and to achieve the goal of becoming one of the top five institutions in Europe by 2020. The video gives an impression of the new FS campus with all its facets. 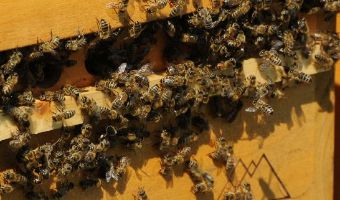