On Friday, May 4, 2018, Frankfurt School of Finance & Management bade a fond farewell to 227 new graduates at a graduation ceremony in Frankfurt’s Paulskirche. The ceremony, this year’s first, celebrated the achievements of students graduating from the Bachelor of Science degree course and the MBA Programmes –  Executive MBA, Executive MBA Kinshasa, Full-Time MBA as well as the MBA in International Healthcare Management.

Professor Dr Nils Stieglitz, President and CEO of Frankfurt School, officially welcomed the guests on behalf of the business school. He thanked the students for the commitment they had shown during their studies. Also, he emphasised the support of the graduates´ dependants. This is how to achieve a successful completion. 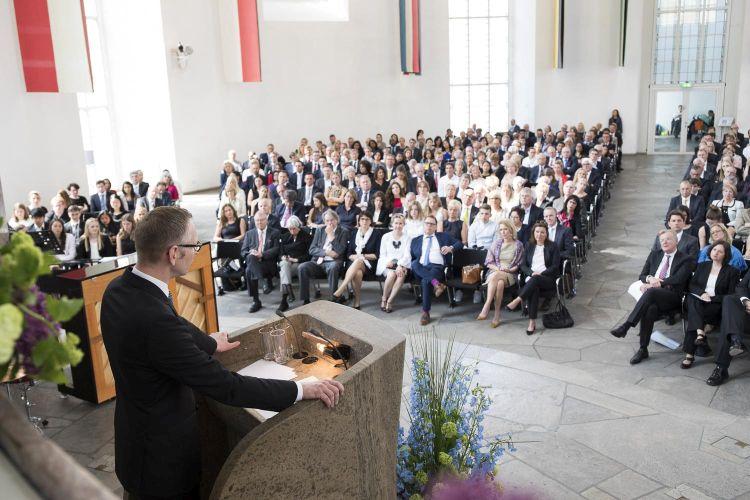 City council Markus Frank congratulated the new graduates on behalf of the City of Frankfurt. He appealed to the graduates to use their new knowledge and skills in a responsible way.

Dr Eric Fellhauer, Co-Head of Investment Banking at Lazard & Co., gave the laudatory speech. “I am proud to stand in front of a group of such high potentials and future professionals with such an excellent education. You will become the leaders in the financial and the corporate sector over the next decades”, emphasised Dr Eric Fellhauer.

In his speech he stressed that the world has become more risky. Also, this affects the careers of the graduates. “When I started my career in the early 1990´s it was still relatively early in one of the longest economic upcycles in history. The foundation was laid in the 1980´s by a business friendly political environment (Reagonomics), while at the same time information technology led to a productivity boost”, continued Dr Eric Fellhauer. Also, China´s development brought stability.

Today, after such a long period of expansive monetary policy, a recession within the next couple of years is more likely than in a long time before, argued the speaker. Nobody could really define the global consequences of a massive quantitative easing. “I dare to predict that your road will be bumpier and the wind – sometimes even a storm – will more often blow into your face. I don´t want to frighten you – actually the best time of my career was the time of the financial crisis – not the least because I advised the German government on the Opel case, which was really exciting. Challenging times do not necessarily mean less fun or less glamour at work. However, you will certainly not master this with the same set of values and norms that my generation had”, he continued.

In Dr Eric Fellhauer´s view, besides being highly educated, luck and attitude are the main factors for being successful. “There are two determining factors for a career – luck and attitude in the sense of the German ´Haltung´. Luck, you cannot influence – so do not event try too hard – simply keep yourself open and flexible to new opportunities and threats. Or, as we are told at the leadership course of the Harvard Business School: Give luck a chance”, the speaker concluded.

On behalf of the Association of Credit Insitutions in Frankfurt (IFK), Professor Dr Nils Stieglitz handed over the award for academic excellence to the year’s top-scoring graduates. This year´s first prize went to Barbara Nitschke, Bachelor of Science in International Business Admininstration. Second prize went to Michael Steinfeld, Bachelor of Science in Business Informatics, and third prize to Yannik Birkhahn, who graduated in Business Administration. 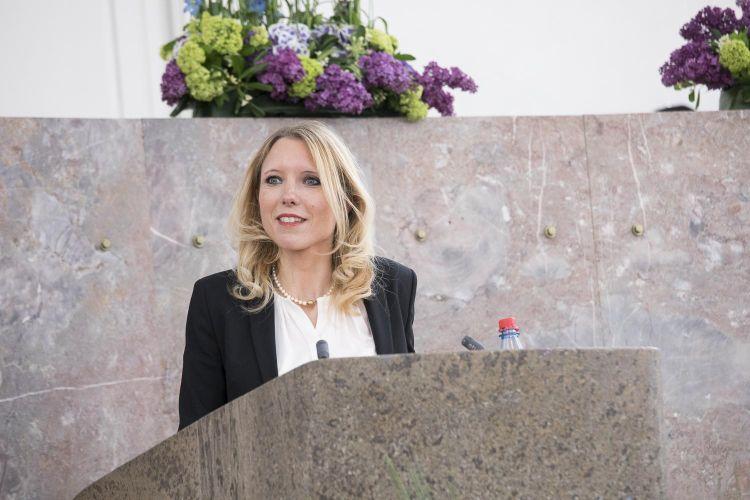 Dr Heike Brost-Steffens, Head of Degree Programmes & Executive Education at Frankfurt School, introduced the Frankfurt School alumni network. She emphasised that FS Alumni still have a strong bond with their alma mater after graduation. The network is a chance to get in contact with new people and to visit interesting events.

Following, Frankfurt School invited all graduates and guests to a reception in the foyer of the Paulskirche. The musical accompaniment for the ceremony was provided by student music society FS Music.